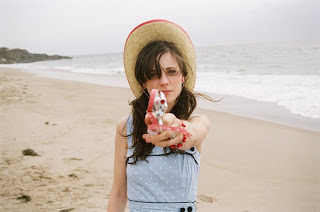 Half road film/half French New Wave love story (including a wonderful recreation of the Madison sequence from Godard's Band of Outsiders), the film chronicles the story of a young man who steals a car to find his lost brother. Amazingly, the car's owner(Deschanel) not only doesn't want to arrest him, but strikes up a relationship with him via her cell phone. The chemistry between Pulci and Deschanel is infectious, and the coming of age story can help but leave you moved.

AFF is proud to be screening The Go-Getter as TBA #1 on Thursday, October 11th!
Posted by Jesse Trussell at 11:47 AM