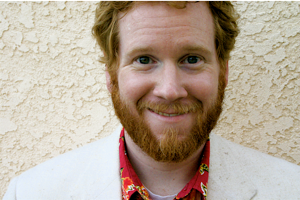 UT grad, screenwriter, actor, documentary filmmaker and New Orleans native. Read Toddy Burton's interview for more on the cultural impact of Katrina, the comedy of Mardi Gras, and where to find queso in Los Angeles.

Also check out the trailers throughout the festival made by The Vacationeers, a sketch comedy group in which Todd is a member!

You’re a native of and seem to interview various family members in the film. Don’t Eat the Baby resonates as a very personal film, but one that addresses the broad scope of Katrina’s impact. Why did you want to make this film?

The first time I went back after Katrina in December of ’05, it was like being in post-war – people going on with their daily lives while walking past destroyed buildings and boats still flipped over in the street. I went out to eat with my family on Christmas Eve in one of the few restaurants that was open and there was a trailer community in the parking lot where all of the employees lived - there was such a lack of low-income housing, businesses were offering trailers to workers just so they could stay open. I knew this was such a unique time and place that needed to be captured on film. Mardi Gras was coming up, and there was already a firestorm of controversy over whether or not it should be held – if people should be partying at a time like this. I thought this would be a perfect backdrop to discuss the issues facing the city because Mardi Gras has always been something that most Americans have a gross misconception of, which to me is a symbol of them not knowing about what’s really going in the reconstruction efforts.

When my crew and I first went down to shoot, I planned to make the documentary very personal. As we shot more and more and talked to more and more people, though, I realized this film shouldn’t be about me, it should be about the city – because is the greatest character of all. I wanted to try and capture the spirit of The Big Easy in its first celebration after being knocked down, and let the audience see for themselves how a whole city could come together. I did leave some personal touches, though, because I do think it’s important that people know the film was made by a local boy and not an outsider.

Your credits encompass primarily comedy, including writing, acting and directing for both shorts and features. How did you transition from straight comedy to an emotionally and politically charged documentary which so successfully traverses between comedy and tragedy.?

In a weird way, I’ve always thought of the documentary as a comedy. The laissez-faire attitude that New Orleanians have towards life in general is unlike anywhere else in , and I thought it important that the film share the same tone. What people will find most surprising about the Mardi Gras after Katrina was how funny it was – parade floats of government officials depicted as devils, trailers covered with joyful decorations, costumes made out of the blue tarps FEMA used to fix roofs, etc. Mardi Gras isn’t just about partying, it’s about satirizing those in power – a tradition dating back to the Civil War Reconstruction when maskers in the streets would make fun of Ulysses S. Grant. The most common reply people on the street would give to us when we would ask if Mardi Gras should have been held was “Sometimes you need to laugh to keep from crying.”

Don’t Eat the Baby has a real sense of community involvement, as the filmmaking crew seems to be a part of the Mardi Gras proceedings. What was production like?

It’s hard for anyone not to get swept up in it all, but I wish we had been able to be MORE a part in the proceedings. Going to for ten days to document Carnival is like being invited to an extravagant wedding reception and having the bride and groom ask you to film it instead of participating.

Everyone we approached – from people on the street to respected historians - was really open to talk to us; especially when they learned I was a local boy who would try and represent the city right. People were becoming more and more disillusioned with the national media’s sudden ignorance of the whole aftermath situation - Katrina was big news when it happened, but by six months later the national news had moved on to other things and nobody really cared anymore about the whole recovery aspect. I would be in , and it seemed as if half the people I talked to thought was totally back to normal, and the other half thought it had been totally destroyed.

You’ve left Austin Texas and have been living in for many years now. How have you made that transition as a Ex living in La La Land?

It was definitely a huge adjustment coming from at first - you can’t find Lone Star here ANYWHERE - but eventually you learn how many ex-Austinites there are on the west coast and that a lot them stick together. The thing about is that it’s so vast both geographically and culturally, it’s easy to find things that remind you of home. You start to discover which grocery stores sell Shiner and which Mexican restaurants actually have queso. Did you know that the original Freebirds is just north of LA? It’s true. They don’t have the “Bad-Ass BBQ Sauce,” but we’ll take what we can get.

With over forty hours of footage, I’m sure your editing process was quite an adventure. What was your post-production experience on Don’t Eat the Baby?

We actually ended up with over forty hours of Carnvial footage and 30 more of just interviews. Luckily the writer in me had come out before we even started shooting, so I had a detailed outline of what I wanted to discuss and how I wanted to thematically present it. We used this outline as a guide while shooting and interviewing, and then used it to coherently organize all of the footage. Of course once editing started there were massive deviations from this outline - the original cut of the movie was almost 3 hours and now it’s 90 minutes - but all-in-all it worked out pretty well. We then had to do test screenings specifically for people who had never been to or Mardi Gras before, because we had become so familiar with the customs and terminology that we started to forget that not everyone knows what a “krewe” or a “flambeaux” is.

It seems obvious that shooting in during Mardi Gras, even in the wake of such tragedy, must have thrown you and your crew into the midst of some wild party environments. Can you tell us one of your more colorful production experiences?

Well at one point we got permission from Pat O’Brien’s – home of the Hurricane – to go into the establishment when it was crowded and just get some B-roll. I guess we looked very official, because a lot of the tipsy clientele were under the impression that A.) we were official Pat O’Brien’s photographers and B.) we were holding a still camera. So if you watch the footage from that night, you see all these groups call us over to their table and then pose – waiting frozen for a flash that never comes.

What's next for you?

On the writing front, I’m currently working on a project for Dreamworks Animation and recently optioned a script to the Jim Henson Company that’s sort of a crazy puppet film noir. I also have a voodoo-centric supernatural thriller set up at John Woo’s company that’ set in , so if all goes well it will go into production on-location beginning of next year. As for directing, I just finished up a super-cheap indie dark comedy script that I hope to find some financing for and shoot next year. I’d also love to develop a sitcom set in a FEMA trailer park.