The AFF Blog has moved!

Please visit us at www.austinfilmfestival.com/news.
Posted by Taylor at 12:40 PM No comments: 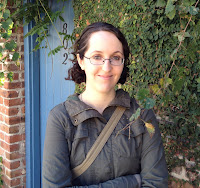 This week's interview is with TV writer Rebecca Kirsch.

In 2005, Rebecca Kirsch won the Austin Film Festival Drama Teleplay competition for her spec episode of “Lost”. That script and a "Deadwood" spec also placed in the Scriptapalooza, Creative Screenwriting Magazine, Fade In Magazine, American Accolades, Write Network, Talent Scout AND American Gem writing competitions! (Will take this moment to remind readers that you can't place, much less win if you don't enter...)

Rebecca worked as Writers' Assistant for "Leverage" series Creators and Executive Producers John Rogers and Chris Downey from Seasons 1-3, writing two freelance episodes during that time, and was promoted to Staff Writer in Season 4. She is represented by ICM and we're excited to have her on board as a speaker for the 2012 Austin Film Festival & Conference.


AFF: Are there real life vigilantes, like the characters in “Leverage”, that help the innocent that have been wronged? Where do the show's writers get such great material to write about?

Kirsch: “Leverage” is about a team of modern day Robin Hoods who right the wrongs inflicted by the rich and powerful on the common man. Unfortunately, in the era of Bernie Madoff, the global recession, bank bailouts and predatory lending, our writing staff doesn’t need to look very far in the real world to find story inspiration, or villains for our five heroes to tackle. Additionally, our “Leverage” writers bring multi-varied backgrounds and life experiences to the room, which greatly influence our episodes. Co-creators, co-showrunners and executive producers John Rogers and Chris Downey encourage our writing staff to pitch story ideas freely, and for us each to support and encourage the pitches of our fellow writers with the aim of making the very best show we possibly can together. With that positive and open vibe to the Writers’ Room, our writing team has a great deal of fun coming up with different and unique ways for our five heroes to take down our villains.

Kirsch: My home office is decorated mad-scientist-chic with floor-to-ceiling index cards, flow charts, mind maps and research photos for the various projects I’m working on; I’m a very visual learner, and find that having a layout of the story in front of me while I write is essential. When outlining a new project, I use multi-colored index cards to break out the story beats, a technique I first learned at Chapman University from a great mentor of mine, professor James Macak (AFF moderator and pitch competition winner). The “Leverage” writers’ room uses a similar but more elaborate technique with different colored cards used to break the story in a specific progression of steps, from general concept to more specific arenas and keynote moments, all the way to individual slug-lined scenes.

Outlining tends to be the hardest part of the process for me, but a very necessary one. Before I allow myself to tackle script pages, I make sure that I have a solid game plan set in stone in the outline. At script stage, I’m always eager to skip ahead and write favored scenes I’ve been looking forward to, but for the first “hack draft” (a phrase borrowed from 2004 AFF winner and former “Leverage” writer Christine Boylan), I aim to just get everything down on paper chronologically, and will only then revise once I’m past the initial daunting hurdle of the blank page.


AFF: How did you break into television, and what advice do you have for others trying to do the same?

Kirsch: I left school with the advice and drive to land a TV Writers’ Assistant gig. After a few internships, I was offered a Development Assistant position at Dean Devlin’s independent studio, Electric Entertainment. I worked for two years with Director of Development Marc Roskin to bring in new material to the studio, and to develop their current slate of film and television projects. It was a fantastic opportunity to discuss story on a daily basis, to read the works of other writers, and to work with and learn from an amazing group of talented producers.

Two years later, when “Leverage” was picked up to series, I was promoted to the Writers’ Assistant position, thanks to the support of my bosses. Having been a part of the series since its very start, I’ve been lucky enough to learn everything about working in television from John Rogers and Chris Downey, and I am so privileged to work with them and the rest of our amazing writing staff. With their support and encouragement, I wrote two episodes during my three years as Writers’ Assistant, and was promoted to Staff Writer in our fourth season.

Leaving film school in search of a television writing career felt daunting because there appeared to be no exact and precise path to my particular goal -- each success story I heard was wholly unique. During the day, I tried to fight the good fight as an assistant, and on nights and weekends I focused on sharpening my skills by writing and rewriting spec scripts. No matter how busy your day job keeps you, be it industry-related or not, my advice would be to always keep challenging your skills as a writer. Don’t just talk about what you want to write; write it.

Thanks, Becky, and we'll see you in October!
Posted by Maya at 10:36 AM No comments:

Let me start this post by saying that I am a huge Star Wars fan. As a child, I wore out more than a few VHS copies of the original trilogy, and if I hadn’t fallen in love with the magic of the movies through George Lucas’s work, I don’t believe I’d be doing this job today. This being said, I couldn’t help but head back to the theaters for the 3D redux of Star Wars: Episode I – The Phantom Menace.

Why would I do this? Even as a 14-year-old, I recognized in 1999 that The Phantom Menace was not quite up to snuff with the earlier films. Sure, the fantastical worlds and sense of adventure was still there, but the performances were mostly leaden and the characters fairly uninteresting. Why would I want to go through two hours of trade blockade confusion and midichlorian mumbo jumbo again? Simple answer: I wanted to see that awesome podracing sequence in 3D.

That’s right. Against all the odds, I’m trying desperately to be a fan of the new 3D experience. But some studios aren’t making it easy, as they continue to drown the marketplace in faded, uninspired 3D conversions. All the arguments against 3D were in full force at the screening of The Phantom Menace I attended. The bright color palette and visual splendor of the film, really its greatest strength, were drained through the filter of the 3D glasses. Not to mention the fact that the three-dimensional effect was almost unrecognizable, which is no surprise considering that the film wasn’t shot with 3D in mind.

So why do I keep going back to 3D movies when experiences like this leave me disappointed? Because, believe or not, there are occasional glimpses into the wonderment that 3D can provide. What about Coraline, the staggeringly beautiful animated film from stop-motion master Henry Selick? That film displayed remarkable depth and clarity in the 3D format, and when I watch it at home, I find myself wishing I were back in the theater experiencing all three dimensions.

That is the feeling that 3D should leave us with. If it’s done right, 3D can keep us going back to the cinema despite the wealth of home-viewing options at our fingertips. Before The Phantom Menace, I saw a 3D trailer for the upcoming Focus Features release ParaNorman. The film was created by many of the same animators and crew members that worked on Coraline, and it appears to have the same charm that Coraline had. But, even more importantly to the future of moviegoing, it looks amazing in 3D. Glasses on.
Posted by Taylor at 3:23 PM No comments:

Last week, I attended the world premiere screening of Tom Hanks’ upcoming webisode series Electric City at South By Southwest.  The first 10 episodes were presented of this series which follows a group of resistance fighters in a dystopian society where resources and communication are controlled.  Tom Hanks chose to tell this story in the webisode format because he felt the commercial constraints of movies and television wouldn’t allow him to tell this type of story.  In an age of pre-branded content, sequels, and remakes, it has been increasingly difficult for original feature film content to be produced (apparently even for Mr. Hanks).  More filmmakers are now focusing their attention to more cost-effective outlets to present their original material especially with media becoming increasingly more sophisticated and accessible.  So what does this mean for the future of storytelling?  Transmedia isn’t anything new but it is definitely something screenwriters should pay attention to.

What is transmedia?  In 2010, the Producers Guild of America officially sanctioned the title “Transmedia Producer”.and defined transmedia as “a narrative that consists of three (or more) storylines existing within the same fictional universe on any of the following platforms: Film, Television, Short Film, Broadband, Publishing, Comics, Animation, Mobile, Special Venues, DVD/Blu-Ray/CD-Rom, Narrative Commercial and Marketing rollouts, and other technologies that may or may not currently exist.”  The landscape for storytelling has changed and now screenwriters may feel increased pressured to write stories that present greater marketing potential across different media platforms.  The debate over “artistic integrity” vs. “marketing potential” between writers and producers has always existed.  It may seem that transmedia further complicates this situation but for the savvy screenwriter, it doesn’t have to.

Writers don’t have to sacrifice the artistic integrity of their work but they should still think about the bigger picture and ask themselves: “Are the characters and world of my story developed enough to present further possibilities?”  Screenwriting is just one form of creative expression that can be extended to other forms (i.e. a novel, graphic novel, webisode series, stage play, etc).  Every character has a back story.  Every storyline has a prologue and epilogue.  These are already inherent to a well-developed story and can be used as a basis for developing further promotional material.  This is why all writers should save all treatments, character analyses, outlines, and early versions of their script to comb through for additional material to use.  Writers should not think about how their story can be profitable (i.e. sequels, product placements, toy lines, etc.) but they should think about how various forms of media can further enhance the experience of the story.  If writers can focus on telling a quality story while being mindful of its possibilities, the outcome could present great rewards.  Obviously, not every writer/filmmaker needs to follow the transmedia model but it is definitely something to consider as the landscape of the industry continues to change.

--Matt Dy, Screenplay & Teleplay Competition Director
Posted by Taylor at 10:36 AM No comments: