Everything You Could Ever Want to Know About Writing for Animation. Everything. Seriously.

Have dreams of writing for Pixar? Curious to know the difference between writing live action and writing for animation? What it's like to work with the studios, how to break in and what you can expect of the development process?

FRIDAY 10/21/11
10:45am-12:00pm
Writing for Animation: The Studios’ Perspective
Stephen F. Austin Hotel, Assembly Room
Where do the ideas for animated features come from? How do animation studios find writers? How do they work with them? Take a look inside the process with Development Execs from Blue Sky Studios, Disney Animation, and Pixar Animation Studios. They’ll walk you through the elements of their creative process (pitching, research, treatment, outline, script, and reels) using examples from great animated movies.
Mary Coleman, Lisa Fragner, Maggie Malone

1:45pm-3:00pm
Graphic Novels and Comic Books: Translating Them to the Screen
Stephen F. Austin Hotel, Ballroom
From Spiderman to Watchmen, comic books and graphic novels are king and have cemented themselves as a diverse commercial and artistic medium whose cinematic adaptations have become some of the most successful films in recent memory. Join the conversation about the complex and conflicted journey of adapting well-known and well-loved stories to film and living up to fans' demanding expectations.
Cort Lane, Chuck Mondry, Beau Thorne, John Turman
Moderated by Álvaro Rodríguez


3:15pm-4:30pm
Writing for Animation: The Writers’ Perspective
Stephen F. Austin Hotel, Assembly Room
Is writing for animation different than for live action? How do animation studios find writers? How do they work with them? Take a look inside the process with several successful animation writers. They will step through the elements of their creative process (pitching, research, treatment, outline, script, and reels) using examples from great animated movies.
Jason Eaton, Mike Fry, Rita Hsiao, Kiel Murray

SATURDAY 10/22
9:00am–10:15am
TOY STORY 3: How 4 Years of Creative Agony Became 93 Minutes of Movie Fun
Stephen F. Austin Hotel, Ballroom
Screenwriter Michael Arndt traces the evolution of the script for the Academy Award® winning feature TOY STORY 3, from the first treatment in 2006 to the final film of 2010. Using clips from the film's early reels, he details all the blunders, missteps, blind alleys, and mistakes he and his fellow writers made in the course of the script's development and presents clips from the finished film to show how those missteps were eventually overcome and corrected.

Check out the full panel schedule here!
Posted by Maya at 1:10 PM No comments:

You already know that regardless of the genre you write in, the basic elements are the same for a great script: tight structure, interesting, multi-dimensional characters, well-crafted dialogue and, above all, a solid and terrific story. Still, if your focus is comedy, you want to know how to make the comedic moments jump off the page and not just rest on the shoulders of actors. Lucky for you, we've programmed several panels around comedy writing, as well as conversations with writers and filmmakers who've taken it to new levels.

THURSDAY 10/20/11
1:00pm-2:15pm
A Conversation with Alec Berg
Driskill Hotel, Ballroom
For over fifteen years, Alec Berg has been one of the leading voices in comedy writing for television and film. He has been nominated for four Emmy awards for his work with Larry David on the NBC series Seinfeld and Curb Your Enthusiasm - where he currently serves as a writer, executive producer and director - and he also served as a writer for Late Night with Conan O'Brien for several months. Berg will discuss his storied career as well as the key differences in writing for television and film using examples from his work on THE CAT IN THE HAT (terrible) and EUROTRIP (excellent!), and the upcoming THE DICTATOR, co-written by and starring Sacha Baron Cohen.
Moderated by Pat Hazell, formerly a special consultant on Seinfeld, a regular on The Tonight Show and a critically acclaimed playwright.


FRIDAY 10/21/11
9:00am-10:15am
Comedy - The Hardest Genre?
Driskill Hotel, Ballroom
Whether going for broad laughs or more subtle humor, comedies walk a razor-thin line between hilarious success and dead-silent failure trying to please their audiences. A discussion on the perils and pratfalls of writing all types comedy, from the sharpest of wits to the dirtiest limericks.
Alec Berg, Jeff Lowell, Craig Mazin


SUNDAY 10/23
11:30am–12:45pm
On the Level
Driskill Hotel, Citadel Room
This panel breaks down TV staffing from intern to showrunner and offers advice on how to get inside a writer's room . . . and stay there. What does "executive producer" mean, anyway? What's a "Mid-Level," and is it a good thing? Donald Todd and Pamela Ribon discuss the politics of pitching jokes, taking notes, and the dangers of being funny while female. Think you'd be strong enough to survive?
Moderated by Monte Williams

Comedy—The Hardest Genre?
Driskill Hotel, Ballroom
Whether going for broad laughs or more subtle humor, comedies walk a razor-thin line between hilarious success and dead-silent failure. Join us for a panel on the perils and pratfalls of writing all types of comedy, from the sharpest of wits to the dirtiest limericks.
Jim Herzfeld, Nancy Pimental, Tim Talbott

And we've got your Film Schedule, too!

Make no mistake, FREAK DANCE is a straight-up musical—a brilliant, musical comedy with dance numbers that rival the very films they are parodying. Adapted by Upright Citizens Brigade co-founder, Matt Besser, from the stage show that ran for more than a year at the UCB Theatre, the comedy skips cheap reference humor and goes right for absurdity. FREAK DANCE tells the story of Cocolonia, a spoiled rich girl who just wants to dance, so she sets out to join the ranks of some local street dancers. Little does she know that this will ultimately involve her in an epic battle of good and evil between two warring dance troupes. Besser and Neil Mahoney have created a sure to be cult classic featuring a cast of new comedic actors and fellow UCB Theatre founders Amy Poehler, Matt Walsh, Ian Roberts and Horatio Sanz.

Writer Fred Stoller stars as Fred Stoller, an actor in Hollywood, playing an assortment of deliverymen, clerks and other oddballs. The rest of the time he wanders the streets researching his book project, Restaurants You Don’t Feel Self-Conscious Eating Alone At. He has a long distance bond with his old friend from back East, Vinnie DAngelo, who hardly ever leaves his rent-free basement apartment. Their relationship is put to the test when Vinnie ventures cross country to stay with Fred to give show business a try. At first, Fred is thrilled to have the company and eager to give Vinnie a live tour of his life, but soon feels trapped when Vinnie quickly reverts to his agoraphobic ways. Stoller and Skrova, both comedy veterans, create a surprisingly touching, but hilarious film about that one friend who everyone has and wants to ignore but ultimately, somehow, can’t.

Fitz is about to finish his rock opera about his life philosophy: the triangle theory that describes how any three points or people can make a triangle. But his world crashes around him when his band mates quit to take paying jobs. A despondent Fitz, thinking the cops are also out to bust him for dealing pot, decides to drive to Oakland to visit his estranged stepfather. He reluctantly agrees to let Jimmy, the 16-year-old neighborhood kid, tag along. However, Jimmy’s dad thinks their road trip is a kidnapping and sets off in pursuit of the duo. Naturally, mayhem ensues. The second directorial debut from an Upright Citizens Brigade founder in the program, Matt Walsh delivers a stoner farce from a script he wrote with AFF Alum Weiner.

Sometimes, screenwriters get to a point where they will do anything to get their film made. Leonard (Leonard actually is the character’s name) is no different: All his life he has dreamed of being a famous filmmaker, but he's better at making excuses than making art. A chance encounter with a wasted A-list movie star could be his lucky break. All he has to do is come up with $15,000 to join the actor at a luxury rehab facility, where their friendship can blossom into wealth and glory. Leonard pressures his writing partner (Nelson) into paying expensive bills while he checks into treatment under false pretenses. Leonard soon discovers that addiction comes in many forms. A daring comedy with serious underpinnings, TREATMENT is about the lies we tell ourselves in order to live, and the price we pay when we start to believe them. Indie film stalwart Joshua Leonard (HUMPDAY, THE BLAIR WITCH PROJECT) and writer/co-director Sean Nelson portray the doomed writing team—two friends who are both ambitious and desperate to make it.
Posted by Maya at 5:20 PM No comments:

A Letter from Franklin Leonard, VP Creative Affairs at Overbrook Entertainment and Creator & CEO of The Black List 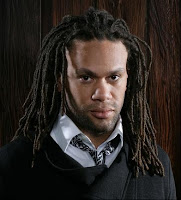 I am frankly embarrassed to have not been more aware of the Austin Film Festival before 2010, my first year attending the Festival.

Here I am, the creator of the Black List, the annual list of Hollywood’s most liked unproduced screenplays, and here’s a film festival built to celebrate screenwriters. Hell, the logo is a typewriter with film cascading out where the paper should be.

Point is, the Austin Film Festival is a natural home for me as it would be for anyone who believes in the power and value of a great screenplay. There will be tons of us there in 2011 and, I am certain, beyond. And we will be talking about screenplays, how to write better ones, and celebrating those that have already pulled off the feat.

Truth be told, you don’t even need to care all that much about the screenplay to enjoy the festival. A love of movies is probably enough, just don't expect to leave without joining the rest of us who revere those who walk out onto the blank page and come out on the other end with a work of genius.

Franklin Leonard will be hosting The Black List Conference Wrap Party on Saturday, 10/22, 11:00pm-1:00am. Open to Weekend Badge holders and above.
Posted by Maya at 9:28 AM No comments:

THURSDAY 10/20/11
1:00pm-2:15pm
Austin Pitch Prep
St. David’s Episcopal Church, Vestry Conference Room
Are you ready to give your pitch? Get prepped for selling your script and yourself and ensure that your first pitch isn’t your last. Will you be in the select group who makes it through to the Pitch Competition Finale on Saturday night?
Bob Schultz, Great American Pitch Fest