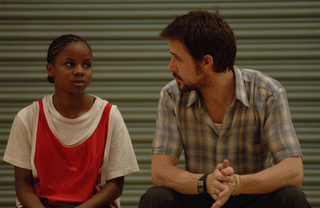 Half Nelson revolves around an inner-city junior high teacher with drug problem who forms an unlikely friendship with one of his students after she discovers his secret. The film is already open in select cities and opens in Austin at the Regal Arbor Theater on Sept. 15th.

A Year Full of Jonas Mekas

Mark September 15 on your calendar. That's the day when experimental filmmaker Jonas Mekas begins releasing a three- to five-minute video a day for a year for Apple's video iPod. That's right: 365 short films, made by the 83-year-old Mekas. Those are two pretty impressive numbers. Mekas will also be curating downloadable classic and new shorts (reportedly the directors on board include Scorsese, Waters and Jarmusch). New York Magazine has a brief run-down here of the Apple project and other things the tireless Mekas has been up to lately. In a Q&A from a few years back, Mekas made a few choice observations:

On independent filmmakers: "They are just more or less in the kitchen of Hollywood. They are Hollywood. If they are different in any way it's only that their budgets will not allow them to be as slick as Hollywood. In their themes and subject they don't differ that much. Of course they differ, but not essentially."

On his editing process: "When I begin to work in the editing room, my method is elimination. I begin to eliminate until what's left is just what I want it to be. Then I begin to change the order, or trim something here and there. Some people have said that I'm careless, random, anything goes. The truth is that what stays in – every frame – is approved by me. The seeming randomness of my filmmaking is actually very deceiving. Because what I film is very precisely determined, chosen by my memory and intuition. And in the editing room it all goes through the Procrustean bed of my editing method. In short: I control absolutely every frame of my film."

Read the entire interview here, and sign up for updates at Mekas' web site.
Posted by Theresa at 2:48 PM No comments:

That's what Jessica Winter argues in a recent piece in The Boston Globe. She acknowledges that "film editing remains perhaps the least heralded and least understood of the cinema's technical arts," and then laments, "2006 marks the moment that the dizzying pinball effect of hyperspeed editing has finally permeated every last corner of mainstream American cinema." The strongest observation to back her up comes from editor Steve Hamilton, who has worked on TV commercials as well as features by Hal Hartley and Ang Lee. Hamilton says, "There is much more pressure on an editor to try to do something 'noticeable,' or perhaps there are more editors who've grown up thinking that they have to make edits that are noticeable." His kicker conclusion: "I think this mentality is leading to a mistrust of the shot."

Check out "The Lost Art of Film Editing" here.
Posted by Theresa at 10:48 AM No comments:

STOMP! SHOUT! SCREAM! is a beach party rock ‘n’ roll monster movie set in 1966 that features an all-girl garage band and the legend of the Skunk Ape. Tragedy interrupts the Violas’ Florida tour. Their car breaks down, their money runs out, and a mysterious, malodorous creature terrorizes the tiny town where the girls are stranded. Dashing local mechanic Hector falls for lead singer Theodora, but which will destroy their emerging love first, the dark secret from Theodora’s past, or the murderous Skunk Ape? Stomp! Shout! Scream! is the inventive feature-film debut of Jay Edwards, producer/editor of Aqua Teen Hunger Force.

“Take a big slice of beach movies, a generous helping of nature-revenge films, and put a pinch of King Kong iconography into a blender, and what do you get? An amusing amalgamation that writer-director Jay Wade Edwards calls STOMP! SHOUT! SCREAM!"
-Film Threat

After attending dozens of film festivals as a filmmaker, volunteer, and judge, Edwards noticed a dearth of movies that were not just smart and well-crafted, but fun, too. “Independent films can be just too damn heavy. True escapism is rare in independent cinema, but it’s something audiences really respond to when done well. Good storytelling, attention to craft and intelligent filmmaking are not solely the property of high-minded drama.” Edwards’ genre of choice is science fiction and horror of the 1950s and 1960s, and while he notes that these films are generally renowned for high camp and low production values, “there were many films that transcended the genre, such as CREATURE FROM THE BLACK LAGOON, INVASION OF THE BODY SNATCHERS, and THEM! These films inspired me to create an interesting story with compelling characters, but do it within the framework of genre film making.”

“Edwards’ loving homage to the short-lived beach-party-by-way-of-horror-film genre of the mid-Sixties does it better than American International Pictures ever did, with canny nods along the way to Them, Jaws, The Horror of Party Beach, and Roger Corman’s own B-movie update Humanoids From the Deep."
-Austin Chronicle

Not a member of AFF yet? You can buy a membership online and start using it for free screenings like this one right away!

Read an interview with director Jay Edwards.
Posted by Christopher at 12:35 PM No comments:

Looking at the Beales Again

This past weekend saw the limited release of The Beales of Grey Gardens, described in a New York Times review as "an assemblage of outtakes" from the 1976 Mayles brothers documentary Grey Gardens, about an eccentric Long Island mother and daughter, relatives of Jackie O. Why the addendum to a classic cult doc? Well, it could have something to do with the successful off-Broadway "Grey Gardens" musical and the planned movie starring Drew Barrymore and Jessica Lange, scheduled at this time for a 2007 release. For an interesting perspective on the original "Grey Gardens," here's a posting on a blog written by an intern for Albert Mayles, where he talks a little about his discomfort with the movie, in which the Beale women don't seem to show the, um, proper discretion that we expect from people when being filmed for a documentary. See The Beales of Grey Gardens for yourself at the Alamo Downtown on Monday and Tuesday, Aug. 21 and 22.
Posted by Theresa at 9:17 AM No comments:

Infidelity, in All the Same Ways

The online magazine Nerve.com may be sex-centric -- it's often described as "literate smut" -- but the site also has a healthy obsession with movies. As part of its current themed articles about "Secrets and Lies," Nerve offers a funny feature called "The Hollywood Guide to Infidelity," wherein you can survey the most enduring onscreen cliches about unfaithfulness. Two examples from the Nerve list:

Women who entice you into affairs with logical arguments ("We're two adults . . .") are the most psychopathic of all.

Married professors, even after a lifetime of fidelity, will inevitably begin an affair with that one special student.

As evidence for that second one, they point to, among other movies, The Squid and the Whale, which was given an advance screening at last year's Austin Film Festival. And you've got to admit it's true -- as soon as the female student shows up, you know the Jeff Daniels character is going to proposition her. There is some level of uncertainty, however: is he going to be inappropriate, or is he going to be completely and boorishly inappropriate?

The link is here -- but wait! Don't click on it yet! Take a moment and check who can see your computer screen. The site is, remember, devoted to sex, and has the racy visuals to go along with that. You don't want your co-workers to get any wrong ideas about your surfing habits, do you?
Posted by Theresa at 8:09 AM No comments:

"The Believer" magazine was started by a few people in the orbit of hip-yet-earnest writer Dave Eggers, who made his mark in 2000 with his memoir A Heartbreaking Work of Staggering Genius. The August issue of "The Believer" features a rambling, "we're having more fun doing this than you'll have reading this" interview with Steven Soderbergh. Some excerpts:

When asked how much Bubble cost: "One point six million. Because I paid people. There's a tipping point. If you're going to make a movie for ten thousand you can talk everybody into doing it for free. You could make a really good-looking movie right now for ten grand, if you have an idea. That's the trick."

When asked what movies he has hated, Soderbergh demurs, and explains: "There's a difference between failures and things that are bad. I'd like to think that I've made movies that were failures, creatively and otherwise."

The full interview is here.
Posted by Theresa at 2:56 PM No comments:

Are You the Funniest Filmmaker in Austin?

Austin Film Festival and Capitol City Comedy Club present the inaugural Funniest Filmmaker in Austin competition! Grab a camera and film something funny. If you make it, we'll play it at Cap City this September.

Whether it's a short film or just something funny that you caught on tape, send it in! It's completely free to enter.
Did I mention that some of Austin's most talented comedians will perform live standup in between screenings? I think I just did.

The winning entry will play at the 2006 Austin Film Festival!

Films must be submitted on DVD or VHS and under 5 minutes in length.This contest is limited to current residents of the Austin area.

You may drop off your film at Cap City or the Austin Film Festival with a completed entry form. There is no entry fee.

Films may be mailed to:

http://www.austinfilmfestival.com/new/files/FunniestFilmmaker.pdf
Posted by Christopher at 3:36 PM No comments:

indieWIRE INTERVIEW: Hans Canosa, director of "Conversations With Other Women"

Director Hans Canosa's romance/drama "Conversations With Other Women" stars Helena Bonham Carter and Aaron Eckhart as a pair who meet and flirt at a wedding reception. The sexual tension rises as the two leave the party and head to a hotel room, where the night turns into a bounty of passion, but then changes to remorse. Canosa joined the filmmaking scene with "Alma Mater," which won the audience award at the Austin Film Festival in 2002. In his chat with indieWIRE, Canosa shares how "Conversations" came together, trying to find that elusive financier, and how fundamentalist Christianity brought him to film.

Where did you grow up?

I was born in the United States, but much of my childhood was spent in Southeast Asia. My parents are fundamentalist Christians, and I grew up on a series of mission compounds.

What were the circumstances that led you to become a filmmaker?

Since my parents' religion takes the Second Commandment literally -- "Thou shalt have no graven images or likeness of anything in heaven or on earth," I was not allowed to see television, theater or movies as a child. So of course I was destined to become a filmmaker.

Despite living on these restrictive mission compounds with a prohibition against film, I still knew that movies existed; studio marketing departments make sure of that. I remember handing out religious tracts under a billboard for "The Empire Strikes Back" in Tokyo, and seeing movie posters in a Cambodian refugee camp (right next to the Coca Cola machines). The moment when I converted to the religion of cinema came before I'd even seen a movie. It was almost like a fairy tale -- I found a mysterious book in my grandparents' attic. It was "The Making of Kubrick's 2001" and I read all 350 pages of it in an hour, just devoured it.
Full article on indiewire
Posted by John Merriman at 9:45 PM No comments: