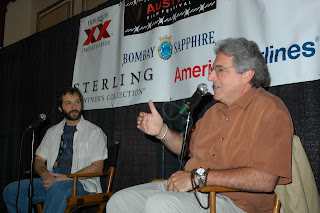 As kind of the new kid on the block, I don’t have nearly as many amazing stories as the rest of the staff. However, I do remember the 2005 festival (my first year) fondly. I went to a panel entitled Up Close and Personal: Harold Ramis that was moderated by Judd Apatow (a huge fan of Ramis’s). Towards the end of the panel the two started discussing “potty humor.” As you may have guessed, they are both big fans of it. The discussion was cut short due to time, but I was lucky enough to stumble on the two in the lobby afterwards still talking. Being the bumbling, star-struck fan that I am I ever so coolly wedged myself into the conversation hoping to get an autograph. I did get one, but what’s much more memorable is that I got the chance to talk with Harold Ramis and Judd Apatow about the most sophomoric of humor for 10 minutes. Of course, when I say talk, I mean I mostly laughed nervously while the two masters riffed off each other, but it was amazing nonetheless.

(I am not the guy in the picture, but I could have been)

Posted by Alex McPhail at 6:06 PM No comments:

United Hollywood has the letter from the presidents that went out this morning. Details here.
Posted by John Merriman at 2:46 PM No comments:

SUNDAY (1/27): I went to the airport in my rented tricked out minivan to pick up the first of the writers. The plan was to take Kathy Garcia (The Kingdom) back to the ranch before Keith Davidson (When Lanterns Dim) got in, but her flight was delayed slightly so we decided to hang out and eat some dinner before driving out to Buda. We enjoyed some casual dinner at Whole Foods (every Austin hippy’s favorite $23 salad) and then cruised back out to the airport to pick up Keith our second rancher for the week. I took them out to the ranch and showed them our digs for the week, which (much to their dismay) is completely without livestock. Studios Ranch is a studio facility in Buda, TX that is gracious enough to host us for a week and let us use their meeting facilities. After getting Keith and Kathy settled in, I went back out to pick up the third and final writer, Sean Minogue (Son of No Man).


MONDAY (1/28): The first day of the ranch started out with the first session with Jim Hart (Dracula, Contact, etc.) and Shana Stern, our first instructors of the week. Jim started out going through their scripts with them and talking about problem areas. He has a very polished system for charting the arc of a screenplay that we called “The Hart Chart.” The afternoon was devoted to going through the points one plots on the Hart Chart, which is designed to track the emotional states of up to 4 or 5 characters. In the afternoon they talked about the various elements that one plots in order to best track these emotional changes.

TUESDAY (1/29): Chart day! Today the writers each took their own giant piece of paper and plotted their points out in pencil. It was an interesting process to watch while they meticulously drew their graphs in pencil and then finally inked them in the afternoon. They all know their stories and characters so well that they can justify the exact placement of each point and line. Some even developed special symbols and markings to symbolize non-traditional movements of the story line (i.e. time travel, slipping into another dimension, etc). At the end of the day the charts looked fantastic and we celebrated with another glass of wine (this became a tradition of sorts).

That night we went out to eat barbecue with the AFF staff and some local Austin filmmakers (including the 2006 AFF Jury Prize Winner for Narrative Feature, Mike Akel and the 2007 Winner Jeff Nichols). It was a fun dinner with some excellent film conversations and delicious barbecue. Additionally it was nice to get away from all the daily ranch chores like cleaning out the stalls and oiling up the saddles.

WEDNESDAY (1/30): Jim’s last day. We spent the morning going through each writer’s chart individually and discussing what the chart showed us and how they might be able to change the scripts in order to work out the kinks revealed by the chart. Jim wrapped everything up with a recap of the chart and how it is useful. He was also always very careful to point out its weaknesses and was sure to tell the writers that they need not adhere to any single set of rules too stringently. After we broke for lunch, our second instructor of the week Alma Kuttruff (Dazed and Confused, The Texas Chainsaw Massacre: The Beginning) joined us for a very different, but equally eye opening look at each script. Since Alma approached the scripts more from a production standpoint, she was able to talk to the writers about the details and possible difficulties of turning the scripts into films. The writers were able to ask questions ranging from specific production elements and the potential cost of them to general questions about how the production starts (i.e. what a Line Producer does when he/she first reads a script). The writers left the session feeling confident in the idea of the sell-ability of their scripts.

THURSDAY (1/31): We were joined by our third instructor of the week Herschel Weingrod (Trading Places, Twins). Herschel started out the same way which was going through (as a group) each script individually and talking about what worked and didn’t work. It was interesting to listen to because he had such a different perspective than Jim and Alma. Not that they disagreed or contradicted each other, but the things Herschel pointed out were entirely new that, after three days of intensive workshopping, had not been pointed out yet. After lunch, Herschel started meeting one on one with each writer. He had pages and pages of notes for each script and they went through the story with a fine toothed comb finding new issues and coming up with new solutions to various situations or problems in the scripts.

FRIDAY (2/1): We picked Herschel up at his hotel and went to Manuel’s for dinner with three of UT’s film professors (Andrew Shea, Stuart Kelban and Alex Smith) and local writer/filmmaker/actor Chris Mass. Dinner was great and the conversation was even better.

Dinner ended too quickly and the writers, Linnea Toney (our Conference Director), Herschel and I went out for drinks on Red River (after walking down sixth street and quickly realizing it was not the place for us). We stayed there discussing films, looking up IMDB on people’s phones (“What was the name of that series of Kung-fu blaxploitation films?”) and naming Canadian stars that have made it big in the US until the wee hours of the morning when we finally had to retire so that no one would miss their flight in the morning.

SATURDAY (2/2): That morning we got up and, in a bit of daze, got everyone off on their planes on time. Keith had decided to stick around in Austin for a few extra days to catch up on work and see some people he met at the festival, but Kathy, Sean and Herschel all made their planes on time.

All in all the week was intense, rewarding, fun, exhausting, hilarious, enlightening and productive. I can only hope all the writers got as much out of it as I did. I am looking forward for the second half of the ranch in LA this summer.
- Alex McPhail, Screenplay/Teleplay Competition Director
Posted by k. at 2:53 PM No comments:

Austin, Texas - February 1, 2008 - Austin Film Festival (AFF) launches a new Documentary Series at the Regal Arbor Cinema with Festival favorite “Oh, Saigon” showing Wednesday February 6th at 7:30pm. Films will screen on the first Wednesday of every other month and feature award winning non-fiction films and festival favorites. Screenings are free for AFF members and only $4 for non-members. More information is available at www.austinfilmfestival.com.

On the last day of the Vietnam War, Doan, age 3, and her family, are airlifted out of Vietnam. Now looking back, Doan attempts to recover her family’s divided past. A father reunites with his brother years after fighting against him in the war that tore them apart. A daughter is left behind after the war and confronts the mother that abandoned her. Their lives are the direct effect of gut decisions, and how a war lingers on long after the fighting stops. We also see a deep willingness to survive in the face adversity and the ability for human beings to heal and evolve after great suffering and strife.

All screenings are at the Regal Arbor Cinema at Great Hills
9828 Great Hills Trails Austin, TX 78759
Posted by John Merriman at 10:52 AM No comments: 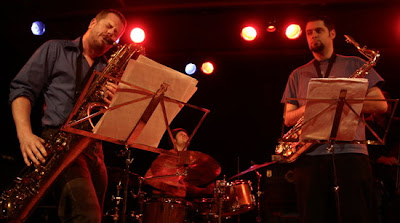 2007 AFF Official Selection Musician will have its television premiere 9pm CST February 17 on the Ovation Network, available in over 25 million homes. Find it on your local dial by entering your zip code at the bottom of this page.

Common sense says you can't make a living in America playing avant-garde improvisational jazz. But Ken Vandermark does it anyway.

Among musicians, Vandermark's work ethic is almost mythic. The Chicago reed player has released over 100 albums with nearly 40 ensembles, spends over eight months per year on the road, and lives every other waking moment composing, arranging, performing — and trying to discipline his two hyperactive canines. Though Vandermark was the recipient of a 1999 MacArthur genius grant, he still spends most of his life in smoky clubs and low-budget recording studios, hoping people will plunk down hard-earned cash to hear his wholly non-commercial music.

Following the artful cinéma vérité style of the internationally acclaimed Sheriff, Musician forgoes all interviews and voice-overs. It is a fly-on-the-wall time capsule that expertly captures every subtle sound and texture of this most American of art forms.

Posted by John Merriman at 10:42 AM No comments: