That's right, the Austin Film Festival has a podcast. Listen to it on any computer, iPod, or MP3 music player!

Listen to Episode #1 by clicking here.

We have some great guests lined up and clips from past conferences to share, so stay tuned.

Posted by Christopher at 9:53 PM No comments:

Three of the best sketch comedy groups of the last 15 years are reuniting... sort of.

Members of The State split up after their Mtv show went off the air (not before performing their last live show together at the now defunct Big Stinkin' Improv Fest in Austin). They all went their sperate ways, some stayed in New York and went on to create Stella and Wet Hot American Summer, and others went on LA and created Viva Variety and now Reno: 911! on Comedy Central. Now, the entire cast has reunited for one scene in the new Reno feature film, Reno 911!: Miami.

Finally, The Kids in the Hall, are getting together for a few apperances and a potential new tour, but no word on another film.

Posted by John Merriman at 5:32 PM No comments: 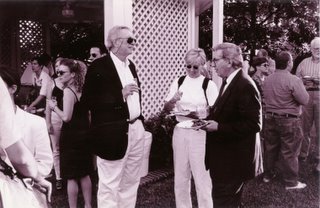 The Onion AV Club does not always get the respect it deserves despite bringing us some of the best reviews and interviews through the years - including interviews with past AFF guests and panelists Shane Black, Harold Ramis, Neil Gaiman, David Cross, Judd Apatow, Mike Judge, The Weitz Brothers, Robert Duval, Jason Swartzman and Robert Altman to name a few.

Recently, they introduced a new feature called "Random Rules" where the AV Club interviews someone by having them put their iPods on shuffle and discuss the first few songs that play. It make for an interesting interview, check out the first Random Rules with Silver Jews frontman David Berman.
Posted by Kelly at 1:58 PM No comments:

Two of the more celebrated documentary films from last year have made their festival and theatrical rounds, so it's time for them to start popping up on DVD and TV. Grizzly Man, the Werner Herzog documentary (edited by Herzog from the "found" footage of its subject) follows self-appointed grizzly bear advocate Timothy Treadwell as he lives among the bears in Alaska during the last summers of his life. Treadwell and his girlfriend famously fell victim to one of the bears (footage is thankfully not included) and the knowledge of his demise provides a good bit of the film's tension. A fascinating look at a the life of a controversial and eccentric man. It's on the Discovery Channel this month. (The Austin Film Festival hosted an advance screening of Grizzly Man last year.)

Also airing this month on cable (this time on A&E), Murderball profiles members of paraplegic rugby teams in the U.S. and Canada. The BBC said: "If you're after honest, unpatronising insights and brutal match action then lock down your wheels for one of 2005's very best documentaries." Check your local listings for showtimes on both films.
Posted by Christopher at 1:16 PM No comments:

Apatow in the news.

A bit of casting news for 2006 AFF panelist Judd Apatow's new movie, Knocked Up. Seems that Anne Hathaway, continuing on her warpath out of kids movies, has been cast opposite Seth Rogen in the romantic comedy. You can read the story here.

The amazing thing about that story, though, is that it seems to imply a Paul Rudd-Ann Hathaway combo, and it doesn't even mention Rogen. That's okay, because hopefully after this movie the 23 year old writer/actor will be huge outside of us, the Freaks and Geeks-40 Year Old Virgin fan squad.
Posted by Jesse Trussell at 1:48 PM No comments:

'04 AFF doc The Loss of Nameless Things on PBS and DVD!

In 2004, at the inaugural AFF documentary competition, we were privileged to screen THE LOSS OF NAMELESS THINGS, directed by Bill Rose.

LOSS will be screening on PBS (in late February in most markets) and is also coming out on DVD.

At the festival, Mr. Rose met with former Lightstorm and CastleRock VP of Development Curtis Burch, and recently announced that he sold the dramatic re-make rights to him. We look forward to following the progress of this amazing story.

Here is a letter from Bill Rose:

Good news! I am excited (and more then a little relieved) to announce THE BROADCAST PREMIERE of THE LOSS OF NAMELESS THINGS. The film will air on the PBS documentary series, INDEPENDENT LENS, hosted by Edie Falco. Most broadcasts will air February 28th - though some, like Upstate New York, will not air until April 21st! Times vary from city to city ­ mostly at 9:00, 10:00 PM or 11:00 PM - with several additional encore broadcasts over the following days. Please check your local listings.

The good folks at Independent Lens have also done a wonderful job creating a COMPANION SITE for the film, chock full of info and useful links, including updates on each cast member.

Though grateful for this rare 90 minute PBS broadcast spot, I still had to cut over twenty minutes from the film. In doing so I made the tough decision to remove most of Oakley¹s work - this in order to leave time for the story itself. (I miss most Richard Zobel¹s fine readings from Grinder¹s Stand. After a brief and quite unexpected illness Richard passed away last fall. Quite stunning, esp. in light of his final words in the film). However, the original version of the film is still viewable -

The ORIGINAL FESTIVAL CUT, which many of you saw, and with all scenes restored, is NOW AVAILABLE for purchase at www.thelossofnamelessthings.com - the OFFICIAL SITE for the film.
(The official site includes synopsis, screening history, awards, and a whole lotta reviews - http://thelossofnamelessthings.com/secondary/press.html. If you haven¹t visited the site please do and drop me a line.)

For educational video and further info, including purchasing the shorter PBS version, which has been edited for language and nudity, please email me directly: Bill@thelossofnamelessthings.com

I am thrilled to announce that the dramatic re-make rights have been sold to former Lightstorm and CastleRock VP of Development Curtis Burch. There is much of interest here, but too early to relate specifics - not wanting to jinx anything; I think I¹ll just keep quiet for now.

Finally, in Seattle, playwright Stuart Greenman, whose play SILENCE, CUNNING, EXHILE, premiered at The American Repertory Theater, and was published in American Theater Magazine, is adapting Oakley¹s life-story for the stage. I am really looking forward to seeing what he makes of this. Stuart writes beautifully - I am honored to have him writing the stage play.


Finally, I want to thank each of you for your enthusiasm, interest - and in many cases, friendship. It has indeed been a long, long journey. I hope I¹ve shepherded this story to a good home. I¹ve know I¹ve done my best. It is time to move on.

To those of you of I¹ve met on the festival circuit, keep up your good work and thanks so much for the privilege of sharing my work with you. You've been a big part of my life these past few years, even when our time was brief. I sincerely hope life treats you well - and to meet up again a little further down the road.

Bill
www.thelossofnamelessthings.com
Posted by John Merriman at 3:01 PM No comments:

AFF Photo of the Week - Robert Altman and Buck Henry 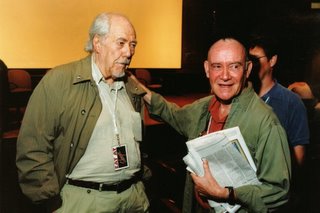 To start off our new weekly posting of photos from festivals past is this classic shot of Robert Altman (soon to be honored with an Academy Award for Lifetime achievement) and Buck Henry during the 1999 festival. That year was a great year for retrospective screenings including Altman's Nashville and McCabe and Mrs. Miller, plus presentations of that year's distinguished Screenwriter recipient, James L. Brooks' films Broadcast News and Terms of Endearment. This particular picture was taken following a screening and Q&A at the Texas Capital of some of Altman's rarely seen television work. The program was co-presented with The Museum of Television & Radio and included episodes of Bus Stop, Premiere, Kraft Suspense Theater and Combat, all directed by Altman during the 60's.
Posted by Kelly at 2:32 PM No comments:

The Ballad of Ricky Bobby.

The trailer for Talledega Nights: The Ballad of Ricky Bobby hit the net a couple of days ago. If you haven't seen it, you need to:

I first heard about this at AFF back in 2004. Adam McKay was in to show his short films and during the Q&A he talked about his next film with Will Ferrell, Talledega Nights. Apparently, every time Owen Wilson saw McKay he loved to quote the script. I remember thinking that Will Ferrell+Nascar=Gold, so I've been really excited waiting for this. Besides, anytime John C. Reilly gets more work is fine by me.

In other trailer news, Wim Wender's new film Don't Coming Knocking looks like a return to form for the director, plus it was written by and stars Sam Shepard. Here's hoping, but between the two the smart money might be on Ricky Bobby.

http://www.apple.com/trailers/sony/dontcomeknocking/
Posted by Jesse Trussell at 2:29 PM No comments:

On Feb. 19th, AFF is launching our inaugural Writers Ranch.

Designed to launch careers, the mission of the Writers Ranch is to actively foster the development and production of emerging writers' and filmmakers' works through intensive workshops with distinguished industry professionals.

Three writers (Jeremy Wadzinski, Terry Parmer and Ben Lee) selected from our Board of Directors will be joining us at the Seven Sisters Estate ranch in Boerne TX, along with two industry professionals.

Congratulations to all three.

Look for posts through next week regarding progress at the Ranch.
Posted by Dawn at 5:11 PM No comments:

The M&Ms web site now has a section dedicated to the Academy Awards ceremony, which wouldn't be terribly original (I mean, doesn't every candy company want you to eat their brand during the Oscars?) except for their offer of free downloadable "Oscar Bingo" cards. You know the drill - much like business buzzword bingo, you can cover the spaces on your card when certain phrases are spoken or certain events happen on screen.

For Oscar Bingo, phrases include "It's an honor to be here" and "I'm speechless." Some of the on-screen events are pretty generic like "Orchestra cuts off acceptance speech," but some of them are unusual and funny without being impossible. Personally, I like "cravat" and "Winner brought mom/dad as a date." Normally I fall asleep in front of the Academy Awards, but with that little something extra to keep me entertained, I may watch the whole thing.

Be sure to bring your Oscar Bingo cards to our Oscar Party at Ranch 616!
Posted by Christopher at 12:02 PM 3 comments: 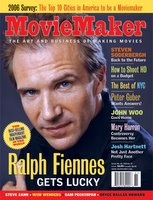 You can read an article about it in The Daily Texan, University of Texas' student paper, that I am quoted in. I learned a good lesson here, no matter how many different things you talk about, a reporter will always pick up on the oddest thing you say.

Looking for an intern

The Screenplay Competition Department is looking for interns for the Spring and Summer semesters. Anyone interested, please contact dawn@austinfilmfestival.com.
Posted by Dawn at 3:21 PM No comments: