John August on The Nines, Writing, Directing and Acting 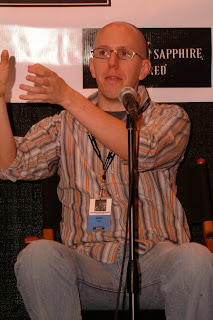 Successful screenwriter and first time Director, John August, has also been a panelist at the Austin Film Festival. His credits include Go , Big Fish , Charlie's Angels, Tim Burton's Charlie and the Choclate factory and Corpse Bride. His new movie, The Nines , will be released this Friday in Austin.

Stylistically, your screenwriting credits cross over several genres. What lead you to the story of The Nines?

John: A lot of my credits are in the fantasy area, but I was really interested in telling a story that on the surface seemed very real. Each of the three sections begins in a very grounded reality, but eventually reveals itself to be something different. I describe it as "stealth science-fiction."

When you originally started writing The Nines did you know you were going to direct it? If so- did you approach writing differently?

John August: I wrote it knowing I was going to direct it. That didn't really change the words on the page -- you have to write as if you're handing it off to someone else, because there are 60 other people who need to be able to understand your intentions upon reading the script.

With the transition to directing, was there a change in how you wrote for characters?

John August: The middle section of The Nines is shot as an episode of a reality TV show, and many of those scenes didn't have scripted dialogue. We had to work it out in the moment. That was a tremendous aspect I hadn't anticipated: sharing a character with an actor, and working together to figure out how to play the moment. I was as much the writer as the director in those scenes.

How did you get the performance out of the actors that you envisioned while writing?

John August: As the writer, I play all the characters in my head, then one by one they're assigned out as actors are cast. There's a handoff that happens -- and it doesn't really go through the director. With The Nines, one of the characters is a very slightly fictionalized version of me, so it was surreal watching many of my quirks (many of my most irritating quirks) mirrored back to me.

The best advice I got about directing actors is to think in verbs, not adjectives. An actor cannot be "more something." He can only do things. So the challenge is to offer notes that speak to action and intent, rather than mental state. Instead of saying, "be more furious," you say, "completely shut her out." It works. I think that advice has trickled back into my writing.

You have attended AFF several times, is there any advice you have to screenwriters who are interested in making the transition to Writer/Directors?

John August: AFF is smart to concentrate on the writing, because directing involves so many different crafts and disciplines that it's easy to get overwhelmed. Once you bite the bullet, it's smart to concentrate on one small area -- like camera movement -- and figure out the options and priorities. Then do the same for music, production design, color timing, lens choice, wardrobe, sound design, editing, locations, et cetera. You quickly realize why directing isn't a solitary craft like writing. You have to be able to communicate your intentions to a wide range of professionals, and that's one of the hardest transitions for a writer to make.

Directing forces you to be more honest in your writing. There are 1,000 things you can do on the page that are impractical or impossible to put on film. On that level, I'd recommend it.

For a list of Confirmed Panelist for the 2007 Austin Film Festival and this years Conference schedule check out www.austinfilmfestival.com .
Posted by Linnea at 11:26 AM No comments:

The great people over at Cinematical just put up a fantastic podcast from Toronto with Terry George about his new film, Reservation Road. Terry is an old friend of AFF, and we are very excited that we will be screening the film at the Paramount theater during the festival!

To check out our full lineup, click here.
Posted by Jesse Trussell at 5:20 PM No comments: