AUSTIN, Texas – May 19, 2009 - “Watchmen” & "X-Men" co-writer David Hayter and producer Benedict Carver’s Dark Hero Studios will judge the 2009 Austin Film Festival (AFF) Sci-Fi Competition. The Sci-Fi Competition is a sub-category of the Screenplay Competition and includes science fiction, horror, supernatural thriller and fantasy genres. For sixteen years AFF has provided emerging writers with exposure to and dialogue with industry professionals. As one of the most respected festivals in the country, AFF supports participating writers by providing unique networking opportunities during the Festival and Conference, which will be held Oct. 22-29, 2009. Screenplay and Teleplay Competition deadlines have been extended to May 22, with a late deadline of June 8, 2009.

“This is a coup for the AFF Screenplay Competition and our entrants,” said Alex McPhail, AFF Screenplay Competition Director. “David Hayter and Benedict Carver are two of the biggest names in Sci-fi and they will lend an enormous amount of expertise to the judging. Finalists will have bragging rights not just for making it to the finals, but for having had a script read by major industry influencers.”

David Hayter and Benedict Carver’s newly formed Dark Hero Studios will produce feature films, television programming, Internet content, graphic novels and videogames. Hayter is preparing to make his directorial debut on his thriller script “Wolves,” which Carver is producing. Hayter’s previous screenwriting credits include “Watchmen,” “X-Men,” “X2,” and “The Scorpion King.” Carver has produced “Doomsday” and “Tekken” among other films. He previously was senior vice president of acquisitions and co-productions at Screen Gems, and he has also been a film reporter with Daily Variety. Dark Hero Studios’ focus on action, sci-fi and horror genres makes them an ideal partner for judging this year’s AFF Sci-Fi Competition.

One of the most respected competitions in the country, the AFF Screenplay Competition provides emerging writers the means to expose their work to major players in the entertainment industry. Past entrants have signed with Artisan Entertainment, Creative Artists Agency, Metropolitan Talent Agency, , DreamWorks Studios, Pixar Animation Studios, Miramax Films, and other highly respected companies.

The Teleplay Competition is open to any spec script from a currently airing network or cable TV show. The two categories are Drama and Comedy, and the prizes are $1,000 each, reimbursement for airfare (up to $500) and hotel (up to $500) for attendance to the festival, and the bronze AFF Typewriter Award.

Winners of the competitions will be announced in at the Annual Awards Luncheon on Saturday, Oct. 24, 2009 at The Austin Club.

Writer Edwin "Bud" Shrake passed away this last Friday at the age of 77. Bud was a long time supporter and board member of the Austin Film Festival. From the early days of the Festival, Bud was there - as a panelist, moderator and fan. 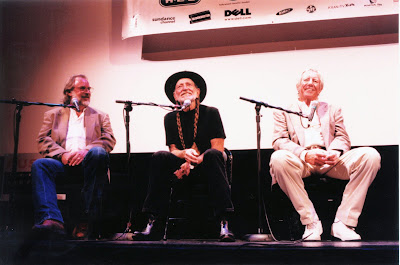 Bud Shrake (right) with two of his old friends, writer Bill Wittliff and musician Willie Nelson at a screening of Barbarosa during the 1999 Austin Film Festival

The Austin American-Stateman's Patrick Beach wrote an article about Bud - chronicling his epic life from early days as a sports writer to his most recent play, "The Friend of Carlos Monzon." That piece can be found here.

This was followed the next day with an article about Bud's days as a sports writer and can be found here. 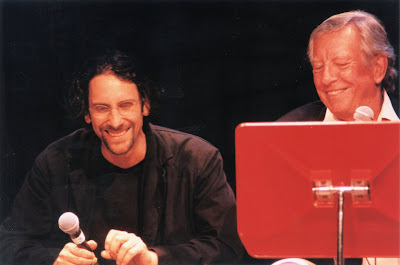 Moderating the 1998 AFF screening of Blood Simple with Joel Coen.

In 1997, Bud and lead actor Dennis Hopper presented a screening of the film Kid Blue at the Austin Film Festival. The film, which never had a formal release in the US, will soon be released on DVD. Fortunately, Bud was able to record a commentary track before he passed.

Some other highlights of his screenwriting career include Tom Horn starring Steve McQueen and Songwriter starring Kris Kristofferson and Willie Nelson. Songwriter was the first film in AFF's recent Made in Texas films series on April 8th at the Bob Bullock Texas State History Museum. Bud appeared at the screening, holding a Q&A after the film with Asleep at the Wheel's Ray Benson. 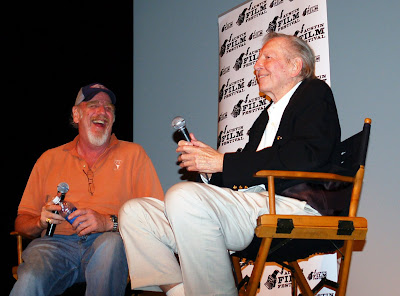 A clip from his introduction for Songwriter can be found here.

In countless ways, Bud Shrake personified the "writer." He was part of a generation of maverick writers, but somehow Bud stood at the center of them all.

Here is a clip of Bud on an AFF panel with Bill Wittliff and Buck Henry, discussing his "million dollar hotdog."


In addition to being a sports writer, playwright and screenwriter, Bud may be best know as a novelist. Some essential reading includes Blessed McGill, Strange Peaches, Billy Boy and 2007's Custer's Brother's Horse. Many of his articles and famous pieces were recently complied in The Land of the Permenant Wave : An Edwin 'Bud' Shrake Reader.

He starting writing at a young age and his entire collection of work now resides at the Wittliff Collection at Texas State University.

I was lucky enough to be around Bud a few times and the thing that I was always impressed by was that he always had a story for every topic. I would sit and listen, far too intimidated to chime in - the quiet guy who knew how incredibly fortunate he was to even be at the same table (thanks Barb). While I thought I never made a lasting impression, Bud always remembered my name.

From fans to friends, Bud Shrake will no doubt be missed.