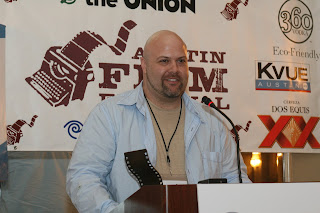 Jimmy Miller (2007 Adult/Family Winner for Slugger) is managed by Josh McGuire of Washington Square Arts. At the 2007 festival he met Gayla Nethercott of Don Buchwald & Associates and she signed on to be his agent. He also met Mary Stuart Masterson who was screening her film Cake Eaters at AFF. Jimmy and Mary Stuart met and knew that Slugger was a perfect project for them to work on together. It has been optioned by Barndoor Productions and Jimmy is currently working on a rewrite. Mary Stuart has signed on to direct Slugger and continues to work closely with Jimmy to develop the project.

AFF@15: Terry Rossio at the Driskill

A blast from the recent past: Terry Rossio and friends hanging out at the Driskill Hotel Bar during the 2007 Conference. 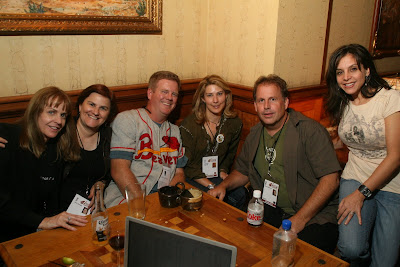 Something that I have always loved about the Driskill Bar is that it located in the heart of the Conference (and yes - there is also a full bar). It is conveniently located between the panel rooms upstairs and the other downtown locations like the Paramount Theatre and the Stephen F. Austin Hotel. Everyone is bound to plop down on one of the couches at some point to re-group and figure out their next move. Whether it is to choose what panel to head to, which shorts program to see or even a quick Dos Equis break, its location makes it the perfect rally point throughout the Conference. In the evenings after the panels and parties are all over, people end up congregating back at the Driskill bar for a nightcap where you can finish off that conversation you were having before dragging yourself upstairs for the next exciting day of panels.
Posted by Linnea at 5:02 PM 2 comments:

The First Saturday in May opens at Dobie!

2007 AFF Award winner The First Saturday in May opens at the Dobie Theater for a one week run this Friday, April 18th.

"RICH AND FUNNY."
- Fort Worth Star-Telegram

25% of the first week's Truly Indie box office will go directly to equine research.
Posted by Jesse Trussell at 4:09 PM No comments:

I recently had a chance to correspond with 2003 TV Drama Winner Stephen Scaia. Here is what he had to say:

I'm glad you got in touch with me...when people ask what the turning point was for me as a young writer I always tell them it was winning at the AFF. It's what opened the door for us, and we've been moving on-ward and upward ever since.

My writing partner, Matthew Federman, and I signed with agents shortly after our trip to the AFF in '03. We went almost right after. Our first writing job was on CBS' "Judging Amy." While there, we sold an original pilot to FOX about treasure hunters. After developing that, we joined the staff of NBC's "E-Ring" until its cancellation. Our biggest break came when we were hired onto the little post-apocalyptic action-show that could, "Jericho." We were there for its entire two-season run...from pilot, through cancellation, resurrection and its now unclear fate. We rose through the ranks and emerged from the show as Producers. Now, we're working on the job of a lifetime.

Yes, life is good. We're eternally thankful to the AFF and the springboard it gave us...it made us respected when we were lowly PA's. It made us legitimate in the eyes of the biggest agencies in town. It made possible everything else we've done. I am in your debt. I loved the Festival, love Austin, and would love to be involved.

--Stephen Scaia (Stephen and his writing partner Matthew Federman won the 2003 TV Drama Competition for their script The West Wing: The Second Law of Thermodynamics)

For more AFF Success Stories check out: http://www.austinfilmfestival.com/new/success_stories
Posted by Alex McPhail at 5:32 PM No comments:

The Importance of Writing Teleplays

There are lots of screenwriters out there. Thousands. Tens of thousands. Most of them have dreams of taking one of the screenplays they have written to Hollywood and selling it, thus establishing themselves as a professional screenwriter and opening avenues to sell more scripts, Diablo Cody style. The fact is that this is rarely the way things go. Certainly having a feature screenplay or 20 to show to people is great. Sometimes new writers (and by new, I mean new to Hollywood) do sell completely original works to studios and get them made into films. It does happen, it’s just not what a writer should bank on. The bottom line is that even for even the most purist of screenwriters, having a teleplay or two in your portfolio is essential.

The most obvious reason for this is that there are simply more jobs writing for TV than there are writing for movies. A single show might have a staff of 3-5 writers (or more) as well as hiring a certain quota of freelance writers.

Another thing to consider is that because it is so tough to get a feature made as your first foray into Hollywood, it is much more pragmatic to consider your portfolio as writing samples. Having feature length screenplays in your portfolio demonstrates your creativity and knowledge of the long form. It shows a manager, agent or development exec that you have the ability to write 120 pages that are entirely your own creation. It shows that you have imagination, vision and the knowledge of the craft to put together a full length movie if need be. The teleplays in your portfolio demonstrate something entirely different, but equally important. They show that you have the ability to write with given parameters. As we covered before, most screenwriting jobs in television. The other two most available jobs as a writer are either as a rewriter or a writer for hire. Most of the time the way it works is you are given a log line or a treatment and are asked to make it into a screenplay. This is writing with a preset number of rules. If you are not able to adapt your writing to these rules, you are no good as a writer for hire. Teleplays display your ability to take a preconceived set of characters and parameters and adapt to write for them in a new and fresh way.

There are two different schools of thought regarding what shows a writer should write specs for. Some say that, obviously, you write for shows you want to work on. This is the most logical stance as you demonstrate to the writers/showrunners of the show that you can write for their characters specifically. However, others argue that it is not smart to turn write specs for the shows you are trying to write for. The reason for this is that the writers/showrunners for a show will almost inevitably be unimpressed with your attempt to write for their show. They are the experts on that show. You are writing for characters that they work with everyday. Nobody knows that show better than its own writers so the idea of submitting to them a script for their own show is not only ludicrous but insulting. You have a much better chance of impressing them if you write a great spec for another show that they are not necessarily the experts on. Then they know that you have the ability to take existing characters and adapt your own writing style to their specific and predefined voices.

There are writers out there that think that writing for TV is below them. They think that writing for film is a pure art form and television is just the hacky cousin to that. Forty years ago they may have been right, but the age of the formulaic sitcom is gone. Cable television, HBO and Showtime have raised the bar in a big way and the networks have answered back. Some the best, most talented writers working in the industry today work in the world of television. The shows run the gamut from action to drama to comedy, long format to short format to miniseries. The thing that is consistent is that almost everything has left behind the episodic format that allowed for freelance work to be the norm. They are all ongoing storylines that allow for complex and interesting character development which then, in turn, draws in some of the most talented and ambitious writers. The Office, LOST, Entourage, The Sopranos, The Daily Show, Battlestar Galactica, 30 Rock. These Emmy nominated shows are home to some of the best writing out there today.

“...when people ask what the turning point was for me as a young writer I always tell them it was winning at the AFF. It's what opened the door for us, and we've been moving on-ward and upward ever since.

Now, we're working on the job of a lifetime. Yes, life is good. We're eternally thankful to the AFF and the springboard it gave us...it made us respected when we were lowly PA's. It made us legitimate in the eyes of the biggest agencies in town. It made possible everything else we've done. “ – Stephen Scaia (Stephen Scaia and Matthew Federman won the TV Drama category in 2003 for their spec for The West Wing entitled The Second Law of Thermodynamics)

“A few years ago, I was a judge in the teleplay competition and was so impressed by the winning entry that I had my agent read it. A few weeks later, the winner had an agent at UTA and has been a working writer ever since. It can happen. So polish your "Office" or "Nurse Betty" or "Mad Men" until it's blindingly good and enter it. You never know.” – Jim Dautrieve (King of the Hill)