Screenwriter and Playwright Horton Foote, who passed away earlier this month, was actually AFF's very first Distinguished Screenwriter Award recipient in the early days of the festival and was a long time supporter and friend to the festival. In 2002, both he and Robert Duvall attended the festival for a special screening of Tender Mercies at the Paramount Theater. Here are two clips from the screenings Q&A - in the first, Mr. Foote discusses the origins of the film's script and in the second, he tells the story of how he and Robert Duvall met ... 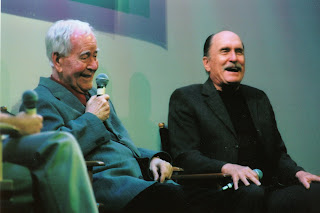 On a personal note, I was lucky enough to drive with our Executive Director, Barbara Morgan, to pick up Horton Foote at his home in Wharton, TX and drive him back to Austin for this screening. While there, he showed us his amazing house and unique art collection. I was also lucky enough to hold his Oscar for To Kill a Mockingbird, which sat next to his other Oscar for Tender Mercies, his Emmy and his AFF award. It was quite an honor to spend that short amount of time with someone who had written two of my favorite films.
Posted by Kelly at 3:01 PM 2 comments: 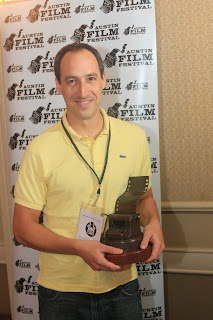 Oren Uziel’s twist-filled, small town murder mystery Shimmer Lake made a pretty big splash at the 2008 Austin Film Festival. As a finalist for both Drama and the Latitude Productions Award the pressure was on to take something home.

I remember thinking that if I wanted to get any traction out of coming to the Festival I had to win an award, but in truth . . . the biggest benefit was the networking you end up doing…”

SHIMMER LAKE is exactly what one hopes to find in an original screenplay: a fresh, one-of-a-kind story populated with characters who are richly drawn and recognizable from life. A very rare thing. Latitude Productions is very proud to have been among the first to notice Oren's talent and we can't wait to see the movie.

However, despite its weight, the Bronze Typewriter Award was not the biggest thing Oren would take away from Austin. The attention the script got at AFF was enough to get the ball rolling on Oren’s next big step.

The script got into the hands of Barry Josephson, a producer with a history of optioning AFF scripts. Josephson has been an AFF Board Member for 16 years and in 1994, when he was the President of Columbia Pictures, he bought the very first winner of AFF’s Screenplay Competition, Max Adams’ Excess Baggage. Josephson (Producer of Enchanted and Executive Producer of the TV show Bones) is a confirmed panelist for the 2009 Austin Film Festival (Oct. 22-29).

A couple of weeks ago, Oren optioned the script to Fox Atomic with Barry attached to produce. Fox Atomic produced The Rocker and is currently in pre-production for the latest follow-up to Danny Boyle’s horror series: 28 Months Later.

I came to Austin with absolutely no connection to the film industry and no expectations other than the hope that I could meet a few writers, learn a bit about the business of screenwriting and with any luck, win an award. Four months later I’d sold my first script. There is no question that things would never have moved so quickly if I hadn’t come to the Festival.

After [the festival] I was lucky enough to attract great reps who got the script into the hands of a great producer, who took it to a great company, and with a bit more luck it will get made into a great movie. Fingers crossed.

Congratulations to Oren and we look forward to seeing the movie soon.