AFF is excited to announce Terry Rossio and Kirsten Smith as confirmed panelists for the 2008 Festival and Conference.

Terry is the writer of the Pirates of the Caribbean trilogy, Small Soldiers, and the classic Disney film Aladdin. In 2002, he was nominated for an Academy Award with co-writer Ted Elliott for Shrek, the first ever Oscar winner for Best Animated Film. Upcoming projects include Jingle, due out in 2009, and The Lone Ranger, out in 2010. Along with all these accomplishments he is also the co-creator of Wordplay, an online resource for aspiring and professional screenwriters. Terry has attended the festival in 2004 and 2007, and AFF is thrilled to have him back for our 15th year. 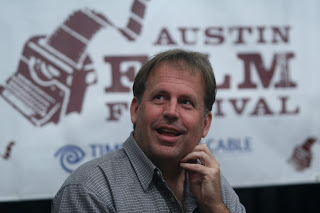 The above picture is Terry at the 2007 Tell Your Story Panel, where registrants grab a seat on the couch, and ask Terry about his experiences as a writer.

Kirsten is the co-writer for the comedies Legally Blonde, 10 Things I Hate About You, Ella Enchanted and She’s the Man. Her latest projects include The House Bunny and The Ugly Truth. Recently, Kirsten and her co-writer Karen Lutz, were featured in the LA Times that draws attention to their laid back style of writing. Kirsten has been a Conference Panelist in 2002 and 2005, and we are excited to have her back. Here is Kirsten (left) with Dana Wheeler-Nicholson, from Friday Night Lights, back in 2005 at the AFF BBQ.

To see other confirmed panelists click here!
Posted by Linnea at 1:43 PM