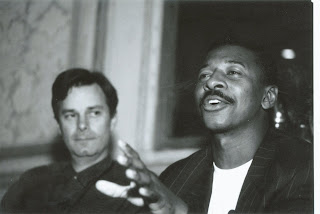 AFF is excited to announce Robert Townsend as a confirmed panelist (schedule permitting) for the 2008 Austin Film Festival. Townsend is known for his film Hollywood Shuffle, the 1987 film about struggling actors in Hollywood, as well as directing Eddie Murphy: Raw. For more of Robert Townsend's credits check out http://tinyurl.com/5shray

Robert previously attended the Austin Film Festival and Conference in 1996. This photo is from the panel Directors Who Write and Vice Versa. Other panelist pictured: Whit Stillman.

Reminder: Only 8 days left till the early registration deadline! Order your Conference or Producer Badge now to save the most money and have the best time at the 2008 Austin Film Festival (October 16-23).
Posted by Linnea at 1:46 PM